From College to Teaching College-Level Courses 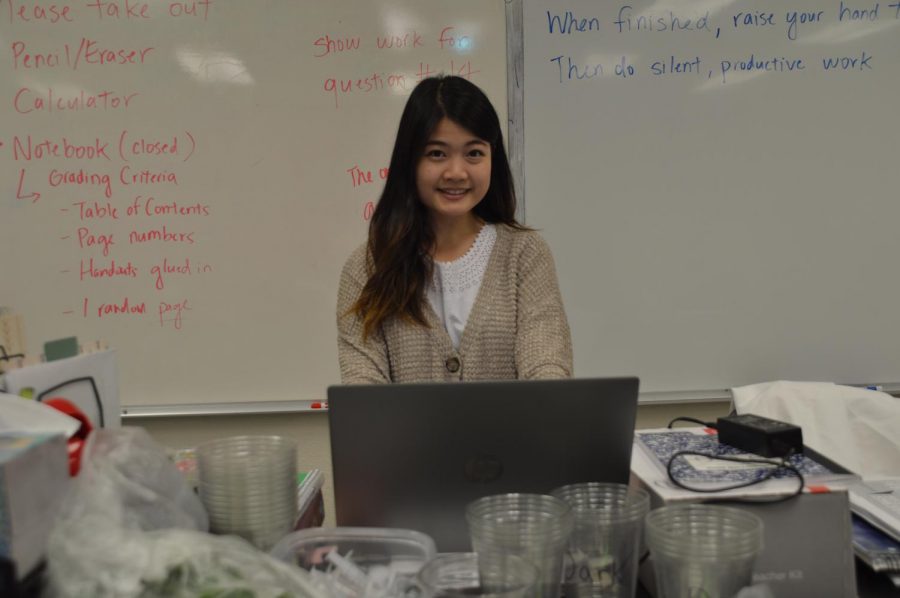 Science teacher Vivien Chern smiles at the front desk in the classroom where she teaches AP Biology, Cal.

Vivien Chern, one of the newest additions to UPA’s science department, will be affected by a spelling error for the rest of her life. When her great uncle came to the United States from Taiwan, his name was incorrectly documented and the mistake has been passed down through generations. The “R” being a permanent typo, Chern is actually pronounced “Chen.” Chern is always sure to correct people in the pronunciation because the bad memories associated with mispronunciation irritate her.

“When I was in elementary and middle school, I used to get teased,” Chern said. “It looks like it is pronounced ‘churn’, then people would always ask me ‘Do you churn butter?’”

Chern debated leaving the “R” out of her last name when she came to UPA but ultimately decided to leave it in.

She was born in Bakersfield but grew up in Chino Hills before moving to La Jolla, where she attended UC San Diego for five years. Hired by UPA just three weeks before school started, Chern moved to San Jose and has been able to quickly prepare for her courses with the help of her content mentor and fellow science teacher, Loren Schwinge.

“I realize that I have to make a lot of sacrifices this first year in terms of how I spend my time after school and on the weekends,” Chern said. “I hope that the time I invest will pay off in the future and that it will get easier.”

Chern is teaching AP Biology, Marine Biology and Principles of Biomedical Science for the 2019-2020 school year. When she is not busy preparing for her courses, Chern enjoys traveling, painting, sculpting, photography and cooking. Her favorite travel destination, so far, has been Taiwan; the varieties of food and abundance of street food quickly won her over. Turkey, Bali, and Indonesia remain high on her travel bucket list.

“I do not have many friends to travel with because it is either too expensive or they do not have time,” Chern said. “I have only really traveled with my family and my boyfriend.”

Chern has put traveling on the back burner for now as she focuses on her career. She knew teaching was something she wanted to pursue from a young age.

“Being a teacher was the first job I ever considered,” Chern said. “When I was in elementary school, I wanted to be a teacher. It was during high school that I considered the medical field.”

Majoring in general biology, Chern began her college career focusing primarily on medicine and science before making a change.

“Halfway through college, I started taking education classes and volunteering in local schools tutoring students,” Chern said. “This is when I realized that it was really fulfilling to work with students and teach them.”

Chern hopes to take notes from her favorite past biology teachers and build personal relationships with her students, getting to know them on a one-to-one basis. Other goals of Chern’s include a high passing percentage for the AP Biology test and making lectures more engaging. She is most excited about her Marine Biology class because it is a new and interesting subject for her.

“I’m really excited to be here because this school is very different from where I did my student teaching,” Chern said. “All of the students here are very hard-working, and they’re really sweet. They are all very self-driven and motivated; they really advocate for themselves.”