UPA alumni speak about their experiences coming back to teach at their alma mater. 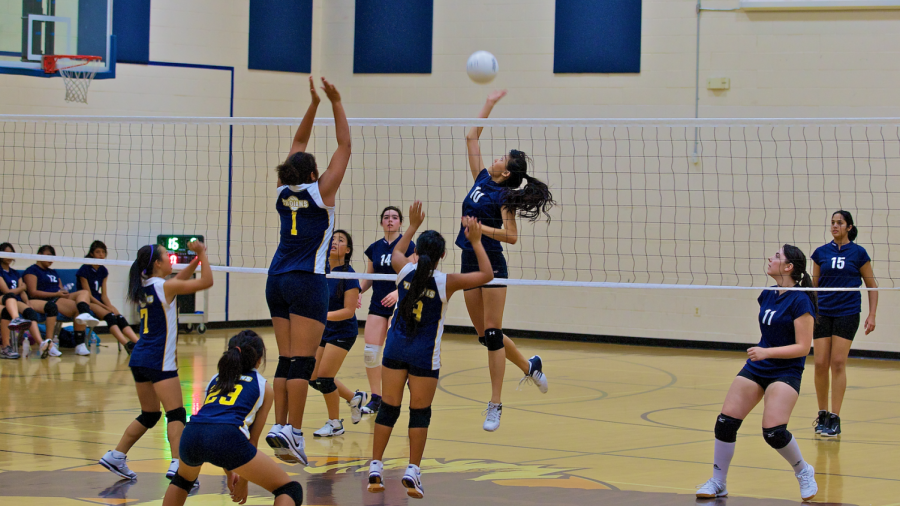 #10 Gong-Guy tips a ball over the volleyball net in a 2011 home game. Photo courtesy of Steve Guevara.

One fateful day involved a total of 18 sushi rolls, eight orders of nigiri and too many handrolls to keep track of shared by two former high school classmates.

Roughly two years ago, math teacher Kevin Khuu responded to history teacher Pablo Lopez’s post on social media about becoming a teacher, allowing them to reconnect and plan a sushi meetup three years after both graduated from UPA as part of the class of 2014.

In preparation for the reunion with Lopez, Khuu ate a large breakfast that day in order to stretch and prepare his stomach for the sushi extravaganza that was about to ensue.

“We’re big boys, and we were trying to push ourselves,” Lopez said.

Lopez claims that by the end, he had eaten more sushi than Khuu.

Little did they know, they would be leaving that sushi restaurant with not just stomach problems, but a friendship that would endure into the future when both of them would come back to teach at the same high school they graduated from.

Khuu, Lopez and English teacher Kathryn Gong-Guy, who also graduated in 2014, are the first UPA alumni to have classrooms of their own at UPA.

Coming back to teach at their alma mater has allowed old high school memories to resurface.

While in high school, the teachers found themselves branching out and trying activities outside their comfort zone.

Along with being a middle blocker on UPA’s varsity volleyball team for five years and playing basketball from eighth grade through senior year, Gong-Guy decided to sign up to do makeup for one of UPA’s musicals her senior year: Hairspray.

“I loved that UPA was a small enough school where I was able to try new things I wouldn’t normally do,” Gong-Guy said.

Lopez joined Hairspray his senior year as well, securing a lead role as Link Larken and branching out from his normal activities of soccer, basketball and playing the drums in UPA’s band.

After being in the band and playing music for prior UPA musicals like Once on This Island and Grease, Lopez became interested in the life of an actor.

“To act is something beautiful because you can escape the role that you play every day,” Lopez explained. “Teaching, in a lot of ways, is an exciting rush like acting is, where instead of your lines you have lessons.”

UPA’s small community did not have positive implications for Khuu as it did for Lopez and Gong-Guy, though.

Transferring to UPA three weeks late into freshman year, Khuu found himself playing basketball at lunch not because of interest but rather to attempt to make friends.

“I was just trying my best to fit in,” Khuu said. “My way of making friends was just to do other things that the kids here did.”

Khuu instead found comfort in what he was good at: math.

It is no surprise why math teacher Anne Wustrow was one of his favorites.

In contrast, Gong-Guy, who always had an affinity for English, ended up needing to retake Algebra 2. Still, she cites Wustrow as one of her favorite teachers.

“She really challenged me, pushed me and gave me the courage to retry something that, for me, seemed like failure but ended up being a really good learning experience where I learned that if we don’t succeed at something right away, it’s OK to retry it,” Gong-Guy shared.

Like Gong-Guy and Khuu, Lopez praises Wustrow as one of his favorite teachers for her ability to teach.

“She makes you understand,” he said. “When I got to college, I thought to myself, ‘If I had Mrs. Wustrow here, I would actually learn this and not be lost.’”

Along with Wustrow, each of the three alumni teachers feels grateful for various other support and experiences at UPA.

For Lopez, the experience was band teacher Jemal Ramirez’s coaching on the drums.

For Gong-Guy, the support was Director of Technology Tom Guevara’s volleyball coaching.

“[Guevara] can be really hard on you,” Gong-Guy admits, “but for someone like me who was a perfectionist in high school, it was a really good thing, and I learned so much from being able to play volleyball on his team.”

Now that Khuu, Lopez, and Gong-Guy have all completed their bachelor’s degrees at UC Davis, Santa Clara University and Cal Poly San Luis Obispo, respectively, they hope to give back to the school.

Gong-Guy has aspired to be a teacher since kindergarten, always having been interested in teaching the communicational skills tied to language arts classes.

Lopez, on the other hand, was not fully convinced he wanted to be a teacher until he finally understood the fulfillment of teaching after his first year of student teaching at Yerba Buena High School.

“On the last day of school, I had students come up to me and tell me how much I meant to them and how much they loved coming to class and looked forward to it,” he reflected. “That made me realize that I am making a difference and touching kids’ lives. That’s why I’m here.”

Although they are now on the other side of the desks, the teachers reveal that their learning days are not over.

“Getting to go back and teach, but also be learning still, in an environment where I experienced so much growth and learning in high school, is exciting,” Gong-Guy said.

“I’ll be learning a lot this year,” Lopez confessed. “Probably more than my students.”