The Teenage Face of Essential Jobs

Students discuss their experiences working, or not working, through a pandemic 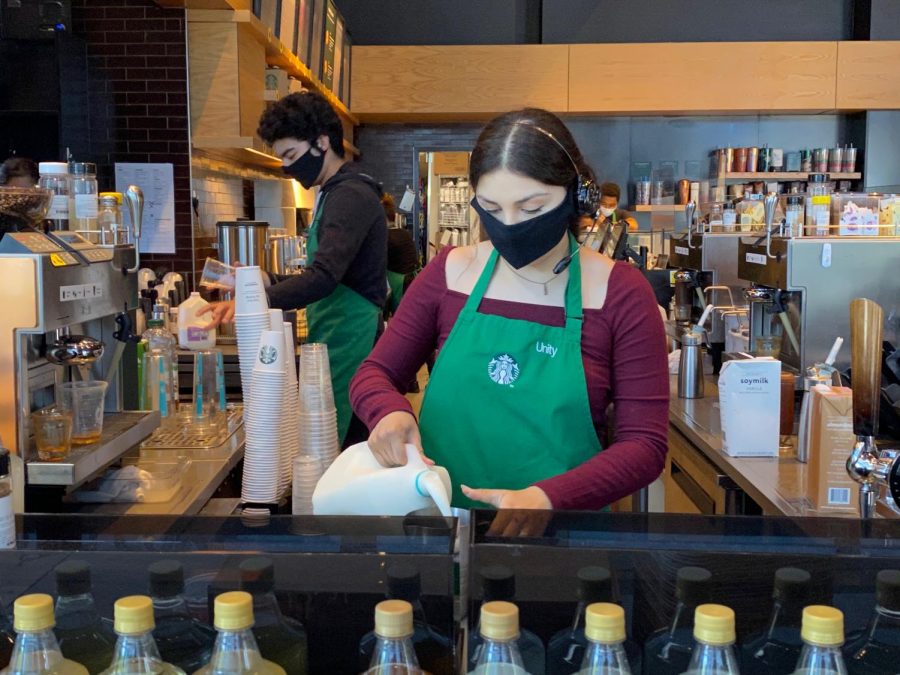 Working beside her coworker Kristian Shirallie, Unity Aldaco makes a drink for one of the mobile orders. According to Aldaco, mobile orders are typically larger orders and include more than one drink or food item.

Walking into Walmart, new requirements resulting from the COVID-19 pandemic are unlike anything before: everybody has masks and gloves on. Customers feel the wet disinfected shopping cart through their latex gloves, then take a deep breath upon entry, inhaling the smell of surgical masks and being cautious of anyone not six feet away.

Walking down Aisle Seven, customers pass an 18-year-old worker who started his shift three hours ago. He had his temperature checked when he came into work, and risks his life every time he clocks in. He now stocks the shelves with Southwest Quinoa.

Anthony Ortiz, a graduated senior of Evergreen Valley High School’s Class of 2020, has worked at Walmart for a year as a cashier and stocker and makes minimum wage. He is afraid of catching COVID-19.

During the first weeks of March, Ortiz was hesitant to go into work because of an increase in shoppers at the store, so he decided to take two weeks off. Once he reminded himself of the rise in unemployment, he went back to work.

“It’s just best if I go to work and make a little bit of money while I can because there are people who don’t have jobs at the moment,” Ortiz said. “So, I told myself, ‘You know what? Just as badly as you want to stay home, just go to work, out of respect.’”

Ortiz has observed changes in customer behavior at Walmart and has learned how to interact with them based on their masked expressions.

“There are some customers that are like, ‘Oh my God, I need to get in and out right away,’” Ortiz said. “You can see it in their face, even through their mask. Those are the customers you don’t really talk to; just let them do their thing, scan their items and get them out as fast as possible.”

According to United Press International, Ortiz should be making $2 to $3 more due to the circumstances. Still, he continues to be paid minimum wage: $15.25 per hour in San Jose.

“I was told [my pay] would go up but it never did,” Ortiz said. “And honestly, it’s a bit frustrating because I hear that all these other places are being paid a couple dollars more and we’re still getting paid $15.”

Ortiz’s manager did not respond to Aquila’s request for comment.

Contrasting Ortiz, Unity Aldaco, a graduated senior from UPA’s Class of 2020, has worked at Starbucks for a year and received a $3 raise in her paycheck due to the increased risk during the pandemic at the end of March.

“That’s why I took advantage of [the raise] and worked more hours,” Aldaco said. “I was like, ‘Heck yeah, I’m going to work. No way I’m passing this up.’”

Despite the benefits of the raise in her paycheck, Aldaco finds it hard to manage the adjustments of daily work life. These adjustments include wearing a mask and gloves and frequently wiping down surfaces.

“You got to be on frickin’ crack to work at Starbucks,” Aldaco said. “They put you on bar by yourself, and you have to know everything. It took me a whole year to learn how to make every drink and everyone is moving a mile a minute. So when we first wore masks, everyone went in the back and tried to catch their breath because it was very hard to breathe and make drinks while wearing a mask.”

Along with the intensity of her job, Aldaco has also experienced misunderstandings when it comes to customer and worker safety precautions like wearing a mask upon entry to the store and maintaining a six-foot distance between the worker and customer. These precautions were violated by customers at Aldaco’s location, leading to an increase in possible exposure to COVID-19 for both workers and customers.

“Whenever you’re going through the drive-thru, you’re supposed to wear a mask,” Aldaco said. “But, when you’re up at the window, sometimes [customers] don’t do that. But you don’t really ask. By the time they put on their masks, we’re already done with the drinks.”

With limited staff, both drive-thru and mobile orders have grown tremendously, Aldaco said, and some customers become aggravated at extended wait times for their orders.

Aldaco recalled an instance when she was cursed at by a woman because the customer had waited around 10 minutes for her mobile order. A car in the drive-thru broke down, causing a halt to all mobile orders while the drive-thru issue was addressed. Despite an explanation about the problem, the woman lost her patience.

“I didn’t know what to do; I was frozen,” Aldaco said. “And then another lady after that ganged up on me with her, and it was very stressful. I actually cried later that day.”

A US jobs report for April indicated the United States has lost 20.6 million jobs since mid-March, resulting in an unemployment rate of 14.7%, a level not seen since the Great Depression in the 1930s.

Among those who have lost their jobs is rising senior Diego Arreola. He started his job at Panera Bread two weeks before his hours and pay were cut to zero.

Arreola filed for unemployment, so he will receive a certain amount of money from the government which makes up for the amount lost from Panera.

The Coronavirus Aid, Relief and Economic Security Act (“CARES Act”), signed into law on March 27, 2020 by Congress, expanded the scope of individuals who are eligible for unemployment benefits, including those who are “furloughed,” like Arreola.

Individuals who are furloughed or laid off are able to receive enhanced benefits. They will receive the weekly benefit as determined by the state for a maximum of 39 weeks, plus Pandemic Unemployment Compensation equal to $600 per week. For Arreola, this means he is making $700 a week, as compared to the $100 he was making before he was furloughed.

“Technically, we’re still getting an income because I found out I can file for unemployment,” Arreola said. “We get paid a good amount of money for just being unemployed. We’ve been kind of utilizing to our advantage.”

However, the succinct line of communication on the employer’s behalf confused and frustrated Arreola and his fellow coworkers.

“[The manager] emailed us saying, ‘Hey, the whole virus is happening. You might need to stay at home, and we’ll let you know if we need you again,’”Arreola said. “And then, that one email was it. We never got another one.”

Despite the vague communication, Arreola misses his colleagues and how they were able to aid him into the work environment at Panera.

“They understood like, ‘Hey, it’s your first job, we know. The people here are very picky about the food, so we’ll help you be able to get used to everything,’ and stuff like that,” Arreola said. “It’s pretty much the colleagues that made it a good time.”

In these unprecedented times, some student workers are struck with the fear of not knowing what could be next for them in terms of safety and income.

“This is just such an odd time, and this is my first job ever,” Arreola said. “Then it got snipped off early because of the whole virus. And I don’t really know how to react.”