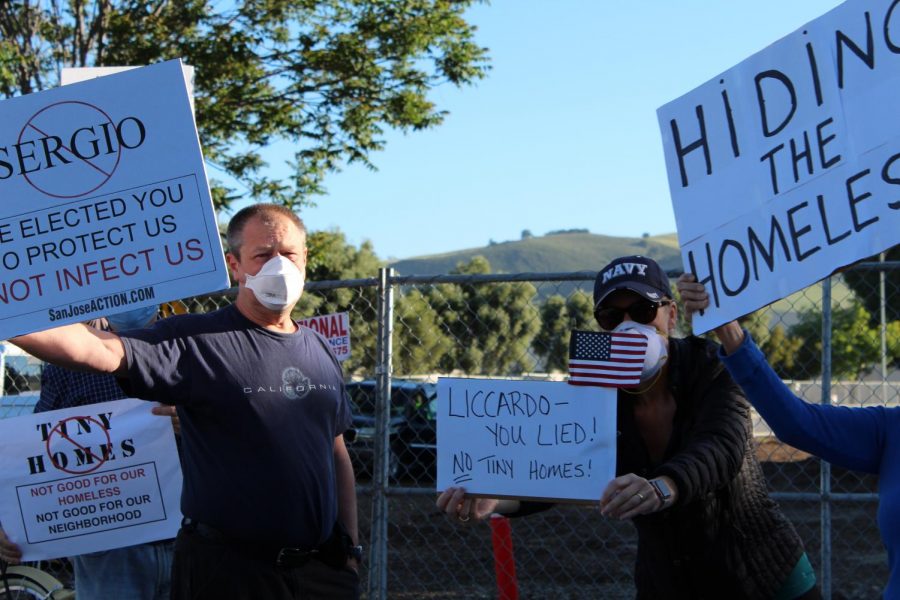 Members of the community express disdain toward Mayor Sam Liccardo and Councilmember of District 2 Sergio Jimenez, protesting the tiny homes at 7 a.m. despite the fact that Jimenez voted against the construction on the Bernal/Monterey lot.

South San Jose community members protested the construction of COVID-19 tiny homes for the homeless in District 2 on the morning of April 28, ignoring national, state and county shelter-in-place guidelines.

San Jose City Council approved the construction of emergency interim housing on city-owned land at the intersection of Bernal Road and Monterey Road on April 21. District 2 councilmember Sergio Jimenez voted no, but the vote passed.

Chosen specifically for its potential for rapid development according to an online public information meeting held by the city on April 27, the project is expected to begin construction in May 2020 and be ready for use by the end of June 2020. The contractor, Habitat for Humanity, is ready to begin construction now.

The facility will house up to 80 individuals. The dorms will be single-room occupancy units with private showers and restrooms and communal areas for laundry, cooking and recreational activity as stated in the City’s report on the project. Through a central referral system with the City’s Housing Department and the Santa Clara County’s Office of Supportive Housing and Valley Homeless Healthcare Program, older individuals with three or more preexisting health conditions will have priority to be housed. According to the City, COVID-19 precautions—like taking an individual’s temperature upon entering and exiting the building, staff monitoring of residents for symptoms and sanitizing communal areas frequently—will be taken. If a resident tests positive for COVID-19, the individual will be transferred to another location to be isolated.

According to the public meeting on April 21 as well as community member Park Berry, the City previously attempted to build housing for the homeless at this location in 2017, but outrage from community members of the nearby residential area shut the project down. Residents feared increased crime rates and a lack of safety in the area.

Barry, who participated in the protest, is upset with the lack of due process in building the dorms. As a member of the building industry, he says common protocols and industry standards have been dropped.

“What would normally take years and a process to allow us to have our voices heard has been dropped under the guise of a pandemic and an emergency situation,” Barry said.

Gov. Gavin Newsom has relaxed requirements for building projects particularly because homeless populations are especially vulnerable during the pandemic crisis because of their lack of ability to shelter-in-place.

“Issues of COVID-19 as it relates to the impact on the homeless population throughout the state has been a point of real concern for all of us for a number of months, the top priority since the COVID crisis began to manifest,” Newsom said in a Sacramento press conference on April 3.

One such requirement that is being forgone is the California Environmental Quality Act (CEQA), and this relaxation is allowing the city to undertake the rapid construction project.

“This has nothing to do with helping people in a crisis or finding a cure for this disease,” Barry said. “It is just a matter of getting to be able to put forward their ideas and their agenda without the local neighborhood being able to have a voice.”

After canvassing his neighborhood, Barry found that most residents were unaware that the construction is even underway.

“Some neighbors are going to walk out once the shelter-in-place ends and they’re going to have no idea that this whole thing is here,” Barry said, motioning to the currently empty lot. “It’s going to be far too late for them to do anything but just wonder how they didn’t get any sort of notification.”

Notifications about meetings to discuss the tiny homes are primarily on Nextdoor, a neighborhood connectivity network. The protests themselves were also planned on Nextdoor.

Another site at the intersection of Rue Ferrari and Highway 101 is also undergoing construction, and that structure will be able to house up to 120 individuals. According to the City, the Bernal/Monterey and Rue Ferrari/101 sites are being developed in accordance with legislation that will allow them to stay in operation until January 1, 2025, no matter the status of the pandemic.

Barry questions the appropriateness of the Bernal/Monterey lot’s location.

“If you’re homeless trying to get back up on your feet, we don’t have much in the way of public transportation here and the nearest grocery is just over a mile away,” Barry said. “There are a lot of discussions that didn’t happen that should have.”

Fellow community member Lorrie Landon echoes his sentiments regarding a lack of proper resources in the area.

“They’re out in the middle of nowhere, really,” Landon said. “We live here and we realize how far we have to drive to get anywhere. They don’t even have cars.”

Landon believes the City is not keeping the best interests of its residents in mind.

“Google owns downtown now, so Google tells the mayor pretty much what to do,” Landon said. “Google says, ‘Hey, I don’t want any of these people around me, so push them out as far as you can,’ and we don’t have the resources that Saratoga or Los Gatos would have.”

Not all members of the community oppose the construction. A passerby yelled out of his car as he drove past the Tuesday morning protest, admonishing protesters for breaking shelter-in-place protocol as well as showing his support for the ability for the project to keep homeless individuals off the street.

“You guys are heartless, yo,” he said. “They’re sick. You guys are lost; go home. You guys are all sick [people] standing next to each other. How does that make any sense?”