Why Indians should stand with the Black Lives Matter movement

Confronting colorism in the community, deconstructing the model minority myth and providing support to combat injustice 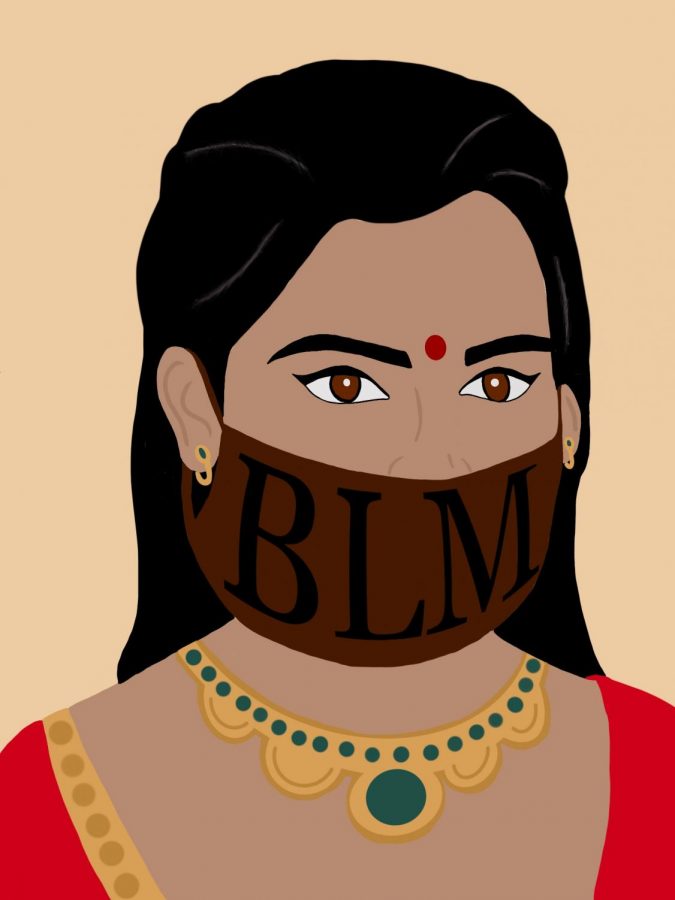 The Gandhi Mahal, a Bangladeshi-Indian restaurant in Minneapolis, was set aflame on May 9 amid the protests and riots regarding Black Lives Matter (BLM) and the unjust treatment of George Floyd, amid crimes against other Black citizens.

Yet Ruhel Islam, the owner of the restaurant, continued to stand by the protests and vocally support them.

“We can rebuild a building, but we cannot rebuild a human,” Islam said in an interview with The New York Times. “The community is still here, and we can work together to rebuild.”

While I am proud to be a part of Islam’s community, it disappoints me to think these moments of solidarity are rare. When was the last time you saw an auntie or uncle stand firmly with BLM?

Senior Parinita Gupta recounted the time an Indian classmate complained to her about the movement.

“He kept complaining to me about how annoying it was for BLM posts to show up on his Instagram and how everyone needed to chill,” Gupta said.

Yes, there are Indians who do stand in support of the BLM movement. But for a demographic that makes up about 18 percent of the global population and represents over 4 million people in the United States, we are not doing enough.

It is no longer enough to not be racist; we must be vocally anti-racist. Otherwise we become part of the problem, subordinating ourselves to a systemic part of racism that has prevailed for hundreds of years.

Freshman Riya Medapati recounted times where she was told by distant relatives in India that she was “too tan” and was given suggestions for skin-lightening treatments.

“I feel like when I was younger, I didn’t really care much, but I thought that being tan was bad,” Medapati said. “But now that I’ve grown up and seen Black Lives Matter and learned about colorism I’m starting to think ‘Yeah, why do people tell me that it’s not okay to be tan?’ It’s my skin color, and it really shouldn’t matter.”

Gupta shared the same sentiment, stating that she had been told by many relatives that her skin was “too dark for a North Indian” and that she should use skin lightening treatments.

We need to also have a talk about our idols and history. One statement I commonly hear is that Indians proudly stand behind the fact that Mahatma Gandhi inspired Martin Luther King Jr. to peacefully protest for his rights. But the people who proudly state this often turn a blind eye to Gandhi’s own racism.

While in South Africa in 1903, he wrote that Black African people “are troublesome, very dirty and live like animals.”

How can we progress as an accepting group and overcome the colorism present in our culture when we still continue to revere a figure such as Gandhi?

“You can’t ignore the things he has done for India,” senior Akash Amalarasan said. “But the fact that he was definitely a racist person should not be ignored. We can appreciate him for his contributions while we can also criticize him for his character.”

Furthermore, we claim that we stand for equality yet still allow India to market skin-lightening products such as Glow & Lovely (formerly Fair & Lovely).

Gupta talked about the bottle of Fair & Lovely cream she had in her drawer.

“I haven’t used it in like five years, but I do remember that I did buy it because I was told by my relatives that I was too dark,” Gupta said. “It’s odd to think that I was excited about something that would’ve changed my skin tone. Thankfully, it didn’t do much.”

Medapati also brought up the lack of representation and diversity in Indian cinema.

“Coming from the south, it’s a little sad about the majority of lighter-skinned actors because there are really pretty people from South India,” Medapati said. “There’s no problem with people having lighter skin or branching out, but I think it’s nice to see that representation.”

Furthermore, it is time that we reject the idea that we are a “model minority,” a term coined in reference to our higher levels of socioeconomic success than others. The term is simply a mirage, shown to have been more hurtful than helpful. The model minority acts as a stereotype that erases the differences among individuals.

By deeming ourselves the model minority, we indirectly convey that we, the Asian minority, are good, while the other minorities, such as the Black and Latinx communities, are problematic.

The term pits minorities against one another and perpetuates stereotypes, ignoring the fact that different minority groups face different challenges. By deeming Asians the model minority, society ignores the fact that African Americans have faced centuries more of oppression in America and instead claims that we all started with the same issues and worked our way from there. Furthermore, it implies Asians are superior to other minorities, and in a way, mimics colonizers’ superiority complex.

In reality, most Indians arrived in the United States out of free will and have always been regarded as a smart group.

For example, Indians represented less than 0.5 percent of the immigrant population of the United States in 1960. Due to a series of legislative changes, skilled worker programs and employee-based visas, migration from India to America surged to a population of more than a million individuals. Indians were brought here as a group based on their knowledge and skills. Africans were not; they were enslaved and exploited for labor.

While Indians do face hate crimes, we have not truly been systematically oppressed or dehumanized in American history in the same way Black people have. The proof lies in the numbers. A 2018 survey by Statista recorded the median household income in the United States and found that Asians made the most on average ($87,194) while Black people made the least on average ($41,361). This wage gap has part of its roots in the 1960s, when white Americans used positive portrayals of Asians to discredit and deny the needs of Black Americans in the Civil Rights Movement while raising the status of Asian Americans. Furthermore, the model minority narrative was used by politicians to connect and find allies in the Cold War.

We also need to acknowledge the gratitude that we owe to African Americans. Asian American families that arrived after the 1960s have Black protesters to thank for their ability to come to America with a relatively fresh start.

In the Civil Rights Movement of the 1960s, African American civil right groups inspired and supported Asian Americans to take action and demand equality of their own. Many early ideals of self-determination and rejection of assimilation present in the Asian American Movement arose from ideologies in the Black Power Movement. Because of these protests, we are able to immigrate to this country and maintain our culture.

We need to stand in solidarity and repay the Black community for the solidarity they have shown us in the past.

“The best way for BLM to get traction is for people with all sorts of orientations, genders and racial backgrounds to come together and support it,” Amalarsalan said.

For one, we need to educate ourselves and others around us. Learning about the history of anti-Blackness and colorism in the U.S. and other countries teaches us a great deal about the injustices the Black community has faced and the injustices we must stand with them to overcome.

When you get the chance to directly support the cause, do it. Donate to bail funds, victim memorial funds and legal funds. Support policy reform, whether it be at the local level or the national level. And support community change and enrichment groups. Check out this article for more ways to help.

“A lot of people have been telling me that Indians face racism too,” Gupta said. “And yes, we do. But it shouldn’t justify us not wanting to stand up for others. If anything, we should stand up for BLM more because we don’t want others to go through what we have gone through and worse.”

We should be upset and outraged at the crimes and mistreatment towards the Black community in America, just as we are outraged by the mistreatment of our own groups. We should turn our attention to the systemic injustices that allow minorities to stay in a repetitive cycle of drugs, police brutality and unfair healthcare, which spare us. We must refuse the model minority myth for good.